The African Faith Tabernacle School in the Sunyani West Municipality is facing some challenges and needs the attention of the Ministry of Education and stakeholders to address them.

Headmistress of the school, Mrs Julia disclosed to GhanaWeb’s Bono Regional Correspondent, that the school faces imminent collapse due to the dilapidated nature of its wooden structures as classrooms.

She expressed worry about how the wooden structures have been ripped off for weeks without any assistance to get roofing sheets to roof them before the reopening of schools.

Mrs Julia indicated that in December 2020, a strong wind blew away the roofing sheets of their wooden structures which serve as four classroom blocks for the lower and upper primary pupils.

The headmistress added that her outfit has reported this to the Municipal Chief Executive of the Sunyani West Municipal but the school is yet to receive any assistance from the assembly though schools have reopened for academic work.

When asked whether her office has made any formal request to the Member of Parliament for Sunyani West, she responded that her office had an intention of reaching out to the MP but couldn’t know the best way to make this request to him since the MP doesn’t have an office in the municipality.

The Sunyani West Municipal Director of the Ghana Education Service (GES), Mrs. Christiana Kankam said that she has discussed with the SDA school which has agreed to temporarily provide four classroom blocks to be used by the African Faith Tabernacle from next week.

The SDA school last year had a new classroom block for which the pupils have been moved into it leaving the old classroom empty.

The staff of African Faith Tabernacle expressed fear that some parents may withdraw their wards from the school due to the current state of the structures.

It was discovered that six pupils have been withdrawn from the school hence their collective appeal to the public, other groups, and individuals to come to their aid with roofing sheets in order not to lose their pupils to other schools which may lead to the closure of the school. 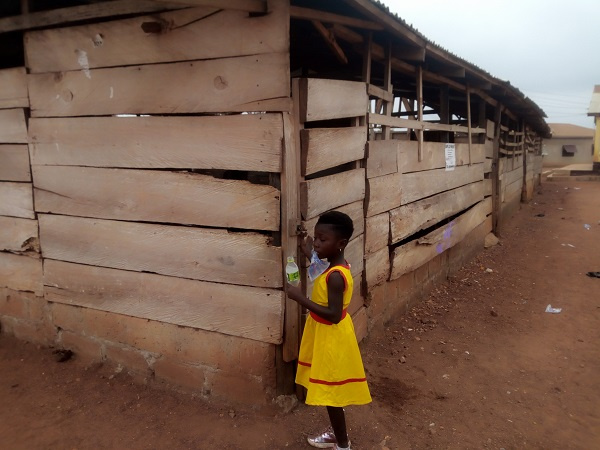 A visit to the wooden structures revealed that most of the pupils were sitting on blocks with few ones on kitchen stools. The pupils, therefore, appealed to philanthropists and other benevolents to donate tables and chairs to them.