St. Corona Exists and She is the Patron Saint For Pandemics 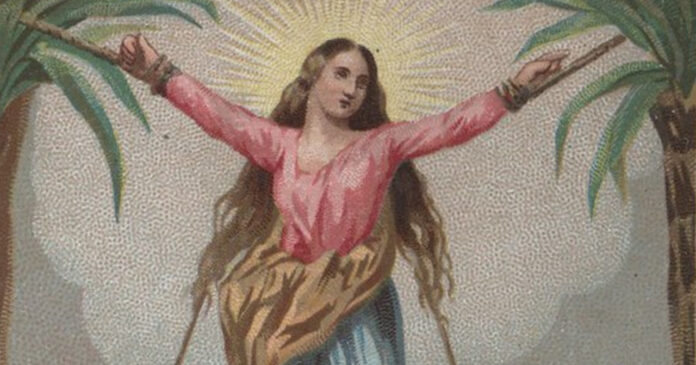 Though there’s little known about St. Corona and St. Victor, both have lived (and died) during the reign of Marcus Aurelius and that they were put to death by order of a Roman judge named Sebastian for being Christians. The 16-year old St. Corona was then married to a Roman soldier who didn’t know that she was a Christian. She came to openly declare to be one as she came to the rescue of St. Victor who was being publicly tortured through lashes that practically ripped his skin.

She knelt and began to pray for him, letting him know she was there for him.  Sebastian ordered the arrest and torture of St. Corona. They tied her feet to the tops of two palm trees which were bent to the ground. When the palms were let loose she was torn apart. According to the Roman Martyrology, this happened in Syria.

In 1943 and again in 1981, the relics of the two saints were examined, and the bones were indeed from both a male and female. In the 1981 examination, they discovered cedar pollen, which was a typical plant from the Mediterranean basin during the time in question. Archeologists confirm that this pollen would have been present in Syria and Cyprus.

According to Aleteia, “St. Victor and St. Corona are pre-congregation saints meaning that they were recognized as saints prior to Church canonization processes being standardized. (The first saint canonized by a pope was Ulrich, the bishop of Augsburg, who died in 973. He was canonized by Pope John XV at the Lateran Council of 993. Canonization became the general law of the church under Pope Gregory IX (1227-41)).”

St. Corona was initially believed to be superstitiously prayed to by money-seekers but there’s no direct evidence on this. Today, she is now revered as the patron saint for epidemics and pandemics.

St. Corona’s feast day, along with St. Victor’s, is May 14. We ask both of them to pray for us all that this Covid 19 pandemic subsides.

COVID-19: Women to be Harder Hit Than Men by Trade Disruptions Caused – WTO

COVID-19: Women to be Harder Hit Than Men by Trade Disruptions Caused – WTO

Pastor, Two Others Who Were Arrested For Flouting COVID-19 Protocols ‘Freed’